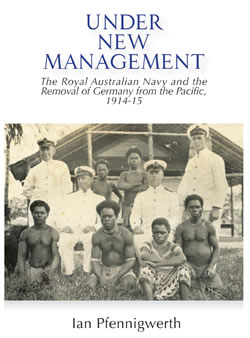 To commemorate the start of World War 1, Ian Pfennigwerth has published Under New Management: The RAN and the Removal of Germany from the Pacific 1914-15. It traces the rise of German presence in the Pacific and Australia’s response to that, outlines the development of the RAN and RAN Reserve, and describes the events of 1914 in terms of the naval strategy that underlay that. It demonstrates that as Australia’s only formed and trained military force the RAN did all the heavy lifting in expelling the Germans. Only nine months old, our Fleet was the strongest British force in the Indian and Pacific Oceans. Led by shrewd Vice Admiral George Patey RN, in 1914 the ‘Wallaby’ navy not only won its spurs but began the proud record of service that continues to this day.

This is a well-researched publication and should be read by all Naval historians. It was a pleasure to read this version that the author has covered so well with his excellent story telling ability. My recommendation is not to miss reading this early action by Australian Defence and the Royal Australian Naval Reservists who participated so effectively.

The Royal United Services Institute of Victoria Library wishes to thank the publisher for providing a copy for review. 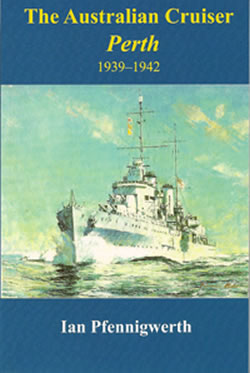 Involved in wartime operations for all but two months of her short but glorious career in the RAN, the ship and her gallant company fought in the Atlantic, Caribbean, Indian Ocean, Mediterranean and, finally in the Java Sea before being overwhelmed by a superior Japanese force in 1942. Half her men perished in the battle or died in the Japanese captivity that followed. Her remarkable legacy of conspicuous service in the thick of things lives on in her namesake ships.

‘I just did a phone interview for my lecture tomorrow on Sunda Strait with a bloke called David Manning. In 1941 he joined Perth and as a member of P2 4-inch gun’s crew, he we was detailed as a lookout above the 4-inch crew shelter during the Java Sea and Sunda Strait actions and saw all of it.

When discussing books on Perth, I asked him which the best was. Predictably, he noted Out of the Smoke by Ray Parkin as the best written about Perth’s crew and their experience during the actions. He then said that Carlton’s book was far too journalistic, but another by a bloke called Pfennigwerth was ‘…a vastly superior book’ and ‘the definitive account of the ship’. When I said that I knew you, he asked that I pass on his compliments regarding The Australian Cruiser Perth. 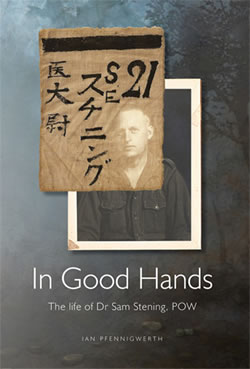 Sam Stening was a Sydney paediatrician, called up as a naval reserve doctor in 1940, who served in several ships, including in the famous ‘Scrap Iron Flotilla’ of RAN destroyers in the Mediterranean. When his ship was sunk on the Tobruk Ferry run he joined the cruiser HMAS Perth. When this, too, went down off Java in 1942 he spent three and a half gruelling years as a PoW doctor in camps in Japan, for which he was awarded a Distinguished Service Cross. Ill and embittered by his experiences, he nevertheless established a successful specialist practice, pioneering the treatment of children and especially the new-born, with the loving support of his wife.

What a well-told story! An easy and well-paced read. Your book brought thoughtful insights into Sam Stening’s life. It appears that In Good Hands was written very much with the readers in mind. Your book gives a pretty good picture of Sam and the contributions he made to the profession and his service to Australia, while at the same time giving just enough insight into his personal; ;life to elicit our admiration and respect for his achievements.

Teamed with The Australian Cruiser – $40 + Postage 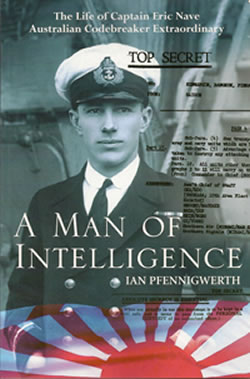 A Man of Intelligence

In an unlikely sequence of events, Eric Nave, a junior Australian naval officer, discovered he had an unmatched affinity for the Japanese language just as the British were beginning their attack on Imperial Japanese Navy codes. Within ten years, Eric was a Commander in the Royal Navy and an acknowledged expert in this difficult task. Just after penetrating the main Japanese Navy code used throughout the Pacific War in 1939, he was invalided to Australia and quickly built up this country’s capacities in codebreaking which were such an important, if largely unrecognised, contribution to the Allied cause in the eventual defeat of Japan and beyond.

Print copies now sold out. Only available as an e-book from Amazon 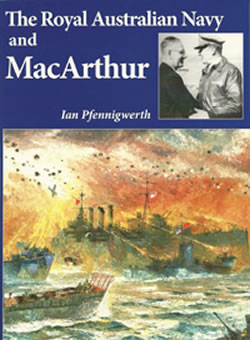 The RAN and General MacArthur

After General Douglas MacArthur became Supreme Commander Southwest Pacific Area in 1942, amongst the forces now under his command was the RAN. There is no evidence that he held the service in any special regard but, despite this the ships, establishments, men and women of the RAN worked hard and effectively to ensure that he was able to deliver on his promise to the Philippines that ‘I shall return’. In naval battles and shore bombardments, air defence against the kamikaze menace, in charting the waters over which MacArthur’s ships must voyage, in the ceaseless escorting of vital convoys against attack by Japanese and German submarines, in amphibious assaults, in the interception of Japanese communications, and in the gallant actions of the RAN Coast Watchers, the RAN played a significant and valued role throughout the Pacific War. This book brings these disparate activities together in one account. 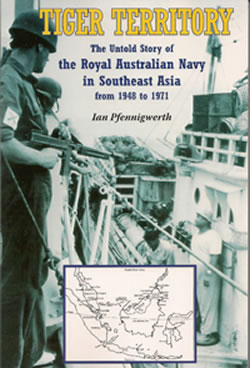 The end of World War II saw a gravely diminished and impoverished Britain attempting to reassert its authority in the Far East. Australian governments were, however, not prepared to leave issues of this nation’s defence in British hands after the debacle of Singapore in 1942. The result was a ‘Forward Defence’ policy which saw an unprecedented Australian military involvement in Southeast Asia. This book tells the story of the Australian Navy’s role in conflicts of confidence building measures in Malaya/Malaysia, Singapore and Indonesia from 1950 to 1972 and its aftermath, from the Malayan Emergency to Indonesian Confrontation.

I thoroughly enjoyed the book, especially the politics of the conflicts.  It also brought back memories and incidents I had forgotten.  I served on Barcoo until December 1963 when she paid off, we had Indonesian officers under training; we thought this a bit strange.  I also had two postings to Clearance Diving Team Two in 1966 and 1967 and we had Malayan divers under training.

Once again thanks for allowing me to relive an important part of my service career.  I won’t forget again.

Print copies now sold out. Only available as an e-book from Amazon